Beginning in 2017, IMGE supported John James with digital strategy and infrastructure as he built his campaign following and raised enough money to wage a serious 2018 midterm challenge to the strongly-established Senator Debbie Stabenow.

John James appeared on the political scene in July 2017. A 37-year old father of two, political outsider, military combat veteran and successful businessman, James had a unique profile that most first-time candidates could only dream of.

As a black conservative running for statewide office against a four-decade career politician in Michigan (a blue state turned red by Donald Trump in 2016), James had a story to tell that didn’t fit the mold. Focused on national security, economic hope, and faith and family, James persuasively argued that his life experience in these areas made him qualified to upend the status quo in Washington that had failed Michigan families for decades. During the general election campaign, James displayed his independent streak, promising he would not show fealty to D.C. bosses in either party, nor pander to voters based on race or gender, but rather protect the American Dream and the Constitution for all Americans.

Despite not winning the same glowing mainstream media attention as progressive darling and Senate challenger Beto O’Rourke in Texas, James’ Senate bid was powered by a youthful grassroots energy that relied heavily on small-dollar online fundraising. This is the story of how James went from launching a long-shot bid for Senate to becoming what President Trump described as a “future star” of the Republican Party.

John James, running as a Republican for the Senate from Michigan, is a spectacular young star of the future. We should make him a star of the present. A distinguished West Point Grad and Vet, people should Vote Out Schumer Puppet Debbie Stabenow, who does nothing for Michigan!

Read on to learn more about some of the tools and tactics the campaign used:

I'm running for Senate to protect the American Dream from those who would shackle our children to debt and dependency, because if we don't have better leadership in Washington, that's exactly what's going to happen. 🇺🇸 #LetsFlyMI

As a political outsider, James began his campaign with effectively no name ID and no establishment support. How did he light the spark to get voters excited about his candidacy? An authentic, personal, sustained digital presence. To begin his campaign, James embarked on a “100 Videos in 100 Days” series posted to his Facebook page. Through this series, James introduced himself to supporters with videos that were often no more than 90 seconds in length, documenting his experience as a citizen entering an unknown world of politics. Some videos featured short direct-to-camera monologues on a given policy issue, but many were selfie videos of James, with no campaign staffer in sight, speaking authentically about his daily experiences. Picking up his son from school, coming home to his family after a long day on the campaign trail, sitting in his car relaying the day’s experiences – this type of unvarnished content helped supporters see who James really was in an unguarded moment.

These videos drew supporters to a Facebook page that eventually attracted more than 97,000 followers. With a dedicated following building every day, it was time to drive traffic to landing pages on James’ website and gather email addresses for his budding house file, which would become more than 100,000 emails strong. This influx helped create a robust small-dollar fundraising program. While most of the mainstream media chose to avoid covering James’ candidacy in a serious way, FOX News was the exception. James made several appearances on the network early in the campaign that further cemented his status as a prominent figure among the conservative grassroots. James used his FOX appearances to hone his message and direct supporters to his website, where they could join the campaign. James saw some of his most powerful engagement from emails that alerted supporters to an upcoming appearance on FOX News, or emails recapping the appearance and directing users to a landing page with video of the interview. It was clear that supporters wanted this type of content, and this trend continued throughout the duration of the campaign. To grow our audience even further with these appearances, timely search and Facebook ads were run in order to cast a wide net and bring in new supporters right when their interest in James was likely to increase. 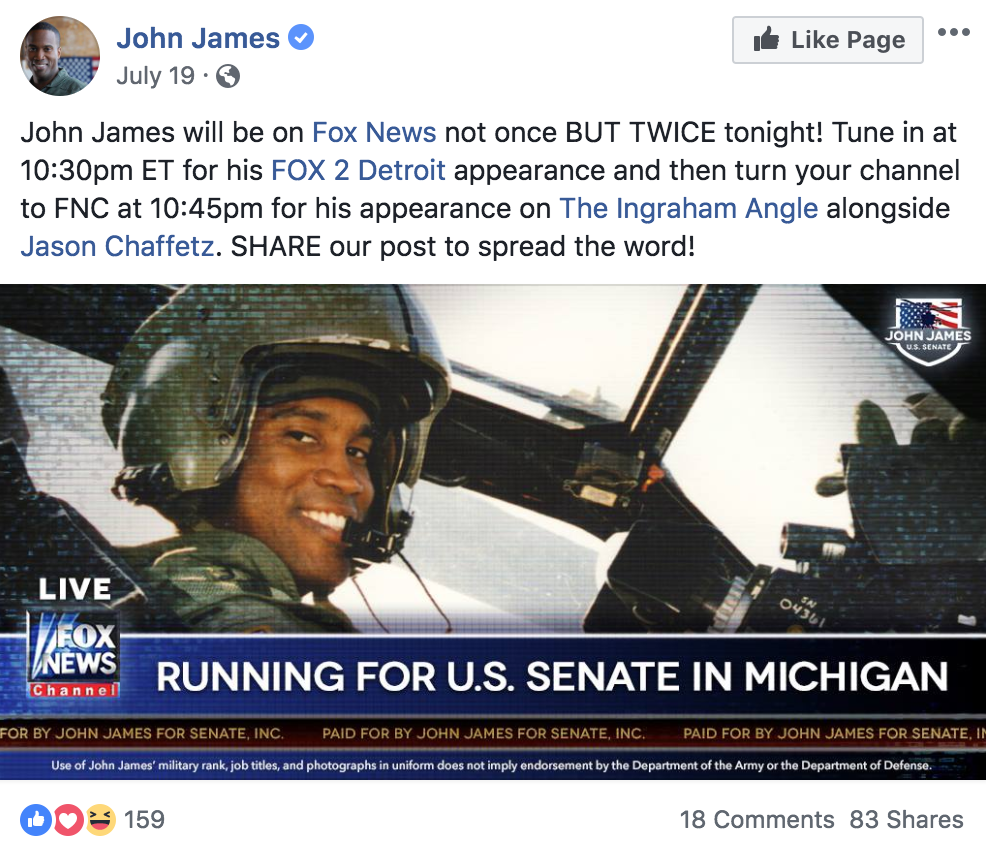 Once James had a strong base of small-dollar donors, it was important to speak to these staunch supporters in a distinct way. When James emailed his supporters with a fundraising ask, he often did so from a “personal” account. This content was stripped down, with no campaign logo as well as short, plain text with a single donate link. The goal with these more personal sends was to stand apart from the more in-your-face, bolded, highlighted fundraising content that often dominates inboxes. Fundraising content for existing donors was crafted specifically to express gratitude for their past gifts. The goal was to show how these gifts were shaping the race, allowing John to compete with a well-funded incumbent politician, and make clear that James could only win through continued financial support. By using dynamic fields in the email body to pinpoint the exact dollar amount of a past gift, James showed supporters that he was aware of their specific contribution, letting them know their support was crucial moving forward.

For house file non-donors, the ask was smaller. During critical moments in the race, fundraising appeals made it clear that now was the time to make a first donation, and that any amount, no matter how small, can make a difference. House file segments also distinguished between Michigan and national supporters, so that messaging could be honed to state-specific issues vs. national political narratives.

By speaking to these different audiences in distinct ways, James was able to build a stronger connection with each while maintaining a coherent overall campaign narrative.

Existing donors were asked to increase their efforts through a monthly recurring donation, or alternatively to match their previous highest donation. The recurring donation appeals were effective, raising more than $50,000 overall.

When donors made a contribution, they were redirected to a page asking to double it. This “doubling” ask brought more than $40,000 overall.

Donation pages also featured an option for donors to cover the cost of their transaction. This cost was minimal for donors, but added over $5,000 in additional revenue for the James campaign.

Additionally, for all existing donors who had created Revv payment processing accounts, one-click donations were available in the body of the email. Clear language was used to ensure donors understood the instantaneous payment processing: “By donating below, you are making an immediate contribution. If you’ve saved payment information with Revv, your donation will go through automatically.” This one-click option increased efficiency and ensured there was one less barrier between opening the email and completing the transaction.

"Michigan needs a strong leader like John James and I am proud to endorse him in his race for Senate," – Senator Marco Rubio >> http://bit.ly/2iRZasF 🚁🇺🇸️💪 #LetsFly #TeamJohnJames

As the campaign progressed, James began to earn several endorsements from nationally-prominent figures. When Senator Marco Rubio became one of the first to endorse James, he maximized this by deploying social media posts and fundraising emails to alert supporters that their grassroots efforts were being noticed across the country. Surrogate email campaigns from endorsers were also used effectively. Figures ranging from U.S. Navy SEAL Rob O’Neill, music legends Kid Rock and Ted Nugent, all the way to President Trump and Vice President Pence signed fundraising emails on James’ behalf urging supporters to chip in and join the grassroots movement. With the backing of the Commander in Chief, James’ fundraising continued to soar.

During campaigns, proper timing is crucial and quick reactions to evolving events often determine success and failure. James’ digital operation always moved nimbly and used breaking news to maximize fundraising. When a new poll was released showing James surging, or he was attacked by an opponent, fundraising emails were deployed within hours to alert supporters. When Debbie Stabenow emailed her supporters calling out James in order to gin up engagement, he responded by forwarding this email to his house file, showing his grassroots followers exactly what was being said, and included a donation link to fight back.

While email was responsible for the vast majority of online fundraising, additional marketing channels were used to boost engagement and revenue. Social media and web push functionality ensured that wherever users were, they could be served relevant, timely campaign content.

In 2018, SMS became an important channel for political campaigns. Underutilized in previous cycles, texting is a way to cut through the content clutter and reach supporters in a more personal way. Many smartphone users experience email overload, making SMS an attractive alternative. Using peer-to-peer SMS technology late in the cycle, James alerted supporters to upcoming rallies and tv appearances, encouraging them to donate using an embedded link. And if supporters had an existing Revv account, they could donate without even clicking on a link – it required only replying “Yes.”

Ultimately, James raised more than $5,000 through SMS during the general election campaign.

Although the James campaign fell just short of victory on Election Day, his online fundraising efforts were an overwhelming success. James received more than 45,000 small-donor online donations, raising more than $2 million overall. These donations allowed James to stay competitive in the race against an established politician despite his outsider status.

IMGE is proud to have stood with John James, who looks to be a rising star in the Republican Party.