What Stood Out About Mike Bloomberg’s Email Strategy

Nothing about Bloomberg’s marketing campaign was normal. Why would his email marketing strategy be?

What do you ask for when your campaign already has everything?

It’s not a question that most political campaigns will ever have to consider. That’s what made Mike Bloomberg’s presidential run unlike anything else we’ve seen before.

Mike Bloomberg’s email strategy was also unlike any other candidate’s we saw this cycle. To prove it, we signed up to receive emails from the top eight campaigns this year. Here’s how Bloomberg’s emails compare to his competitors’ emails:

Out of the eight campaigns we looked at, seven were on an identical mission: make as much money as possible. Bloomberg’s campaign was an exception. While other candidates were looking for donors, Bloomberg was looking for supporters. He needed people to pledge their time, their energy, and their votes – not their money.

How does a campaign achieve that level of voter engagement? With a digital strategy that seeks to create not only supporters, but hyper-engaged supporters. That’s why 40% of the emails we received from Bloomberg focused on two topics – volunteering and events. Here’s one of those emails we received. 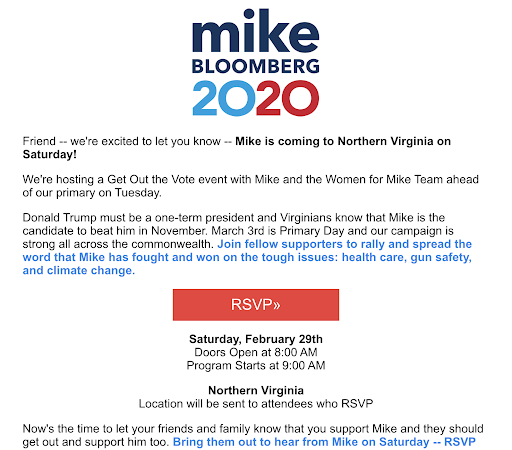 That 40% may not seem like a significant percentage – that is, until compared to his counterparts. Only 7% of the emails we received from other campaigns fell into the “volunteer/email” category. The other 93%? You guessed it – those fell into the “donation ask” category. This year’s crowded primary meant that no email could go to waste and every dollar raised by a campaign was a win.

That’s where the advantage of operating a self-funded campaign lies. Bloomberg was able to join the race late and still keep pace with other candidates by not having to spend any time fundraising. That’s not to say that there aren’t any downfalls to running a self-funded campaign. Bloomberg faced his own set of challenges in this race related to funding that other candidates didn’t have to face.

Having supporters who donate their own hard-earned dollars is a great way for campaigns to create extremely loyal and invested supporters. Bloomberg didn’t have any supporters who could be invested in that same way.

Instead, his supporters were expected to buy into the idea that his billionaire status would be enough to take them across the finish line. That’s a strong selling point – but did it also backfire by signaling a message of “I don’t need you, I already have everything I need” to his supporters? It’s possible, and it looks like self-funding his campaign led to one other key difference in campaign communication:

We all saw the memes about how impossible it was to avoid a Bloomberg ad for a while there. Looking back, the best place to hide out might have been…your email inbox?

From February 3 to March 3, we received 43 emails from the Bloomberg campaign. The other seven campaigns we looked at sent us 725 emails in that same timeframe. Who was doing the most?

Mayor Pete, by a long shot, with 195 emails in one month, followed by Biden with 143. That’s a LOT of emails. To put that in perspective, that’s an email every four hours for a whole month from Mayor Pete. Bloomberg spent over $217 million on advertising during this period. If Bloomberg was going all-out on advertising, why did Mayor Pete end up sending four times as many emails as him? The answer is simple.

Mayor Pete needed money to keep his campaign going. Bloomberg didn’t. For most campaigns, email is as much of a fundraising channel as it is a communication channel. Without needing fundraising, email became a one-dimensional tool for Bloomberg’s campaign. By not needing dollars from his supporters, he also didn’t need to communicate with them as much as those candidates that did need financial support.

Was this email strategy unique to Bloomberg, or should we expect this style of campaign communication from the next self-funded candidate we see? We can’t answer that question, but here’s what we do know: It didn’t work for Bloomberg, but he did provide some valuable lessons for the next billionaire candidate to learn from.

Email Fundraising Is About Earning Dedicated Donors – Not Just Dollars

Bloomberg’s failed strategy showed us that a self-funded candidate can make it far in the race – but that alone isn’t going to be enough to guarantee a victory. A billion-dollar candidate still needs to get their hands dirty if they expect people to go out and vote for them. To do that, voters need to be engaged and included every step of the way, and that’s what fundraising achieves.

Taking people on a journey from supporter, to donor, and eventually to voter takes time, but it builds a strong base of support for the candidate to stand on. By trying to expedite that process, Bloomberg showed that when it comes to political campaigning, it’s the people that take you far – not just the money.

Want to power your grassroots campaign with online fundraising? See how we do it.