Who spent the most on Facebook advertising in the run-up to midterms? We took advantage of Facebook’s new Ad Archive Report in order to find out.

Using data from October 28 to November 3, we broke down who’s spending the most, what they’re spending it on, and what their midterm strategy is based on the advertising information made available by Facebook. Find out who’s most responsible for the political ads dominating your news feed below.

What is MoveOn? Formed in 1998 as a response to the impeachment of President Bill Clinton, MoveOn is a progressive public policy advocacy group and political action committee that raises money for Democratic candidates and supports progressive causes around the country.

MoveOn’s strategy:  MoveOn targets specific Congressional districts with personal, straight-to-camera content. Most of MoveOn’s ads are videos of men and women describing why they are voting for a certain candidate in their specific district. A significant percentage of MoveOn’s content has a female narrator and several are in Spanish, reflecting a focus on women and Spanish speaking voters. Who is Beto? Due to overwhelming national media coverage, you have probably heard of the young Congressman from El Paso. When he is not busy giving interviews for candidate profiles in the New York Times or Washington Post, Beto’s campaign has used their massive campaign war chest to build a robust digital GOTV operation.

Beto’s Strategy: Beto’s campaign has focused heavily on get out the vote advertising in an attempt to push turnout among young and minority voters. Beto has made a conscious effort to avoid out-of-state endorsements and celebrity involvement in an attempt to tamp down concerns over his ability to appeal to Texas voters.

Beto’s ads center on educating voters about local polling locations, alerting potential voters to Election Day, and reaching out to Spanish-speaking voters — several ads feature Beto speaking to the camera in Spanish. The campaign’s digital content in the last week of midterms has struck a positive, youthful tone in their bid to turn Texas blue. The NRCC’s Strategy: The NRCC faces a tough challenge — maintaining a Republican Congress while facing a significant fundraising disadvantage and a historically tough Congressional map. The majority of the last-minute ads run by the NRCC focus on driving Republican turnout and getting the base to the polls.

Many ads feature familiar Republican fundraising boogeyman, Nancy Pelosi, and warn of  higher taxes if the Democrats take the house. These familiar appeals to the Republican base represent a focused effort to spur Republicans to show up on Election Day. 4. Our Flag Our Country

Our Flag Out Country’s Strategy: Our Flag Our Country has focused their digital operation on attacking Senate Majority Leader Mitch McConnell, the GOP-led Congress, and the Trump administration.

Our Flag Our Country’s ads consist mostly of face-to-camera testimonials and “Now This” style videos that bash Congress and GOP-backed legislation, such as tax reform. The content strikes a negative tone and attacks Republican leaders without openly endorsing or advocating for the Democrats. Narrators openly describe themselves as independent or criticize the two-party system (while continuously bashing the GOP) in an attempt to appeal to conservative and independent voters that might have liberal tendencies. Planned Parenthood Action has also waded into specific midterm contests — attacking Republicans on issues like the protection of pre-existing conditions and trying to turn out the vote for their favored candidates, like Stacey Abrams and Jacky Rosen. Planned Parenthood Action’s strategy also targets women and minority voters, focusing on reproductive rights and serving several Spanish-language ads. 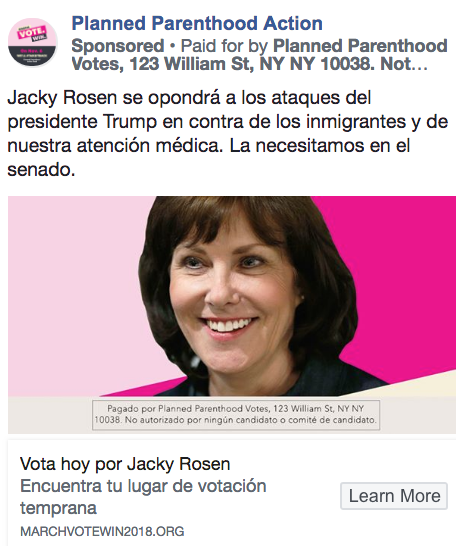 Donald J. Trump for President’s Strategy: The President has sought to make the midterm elections about two major issues — his presidency and immigration. As a result, most of Donald J. Trump for President’s ads put the president on the ballot or focus on the threat of illegal immigration. The committee’s advertisements — including the now infamous Luis Bracamontes advertisement — focus on GOTV efforts and the caravan of Central American migrants approaching the U.S. border.

Videos make up the majority of the committee’s ads, highlighting shots of Trump and the chaos associated with the caravan. Donald J. Trump for President’s mission is clear — drive Republican voters to the polls by making the midterms a referendum on border security and the Commander-in-Chief himself.

What is It’s Our America? It’s Our America is a Facebook page paid for and operated by Priorities USA Action, the largest Democratic super PAC. Priorities USA pushes top progressive policy issues and uses a grassroots fundraising network to support progressive candidates and causes. The Democratic super PAC’s goals focus on fighting Republican policy and winning back the House, Senate, and eventually the White House.

Their ads are tailored to appeal to younger demographics and focus on one message — getting out the vote. Most of It’s Our America’s ads are shot face-to-camera, feature someone between 18-25, and encourage people to “force politicians” to listen to them by voting. Their ads are modern, catchy, and causal. It’s clear to us  — It’s Our America’s increase in digital advertising spend is designed to push young people to the polls. As President Obama has become increasingly involved in the Democratic midterm effort, progressive groups like NextGen America have increasingly sought to use the former President as a weapon to drive turnout in closely contested elections. What is Working For Us? Working For Us is a PAC paid for and supported by Priorities USA Action. With a relatively barren Facebook page founded in August 2018 and a similarly weak website, Working For Us doesn’t have much organic content to show for themselves. However, their ads show that they are committed to their parent PAC’s goals of fighting Republican policy and winning back the House, Senate, and eventually the White House.

Working For Us’ Strategy: Working For Us has focused their recent digital barrage on vulnerable Republican candidates, including Rick Scott and Mike Braun, and attacking the GOP’s stance on healthcare and gun safety.


The PAC’s messaging centers around attacking Republican stances on healthcare, gun reform, and tax policy in a direct appeal to the Democratic base. Focusing on video ads, Working For Us utilizes a combination of straight-to-camera testimonials, “Now This” style videos, and heavy-handed metaphors to attack Republican candidates. Working For Us’ strategy is simple — attack Republican candidates and hammer home Democratic talking points in order drive out the Democratic base. HRC PAC’s Strategy: HRC PAC has directed its recent advertising spend towards boosting efforts of the chances of their preferred candidates. Most of their advertising dollars have gone to “Now This” style video ads, imploring voters to get to the polls and support Democratic candidates friendly to their cause.

In order to spur LGBTQ voters to the polls, HRC content portrays Republicans as a threat to equality and civil rights. Highlighting prominent Democratic candidates like Kyrsten Sinema and Stacey Abrams showcases a focus on turning traditional red states blue. Notice a pattern emerging? Of the top spenders, only two out of ten are Republican. The Democrat’s record-breaking fundraising numbers are leading to massive amounts of digital spending and saturating Facebook with last minute advertisements. Take a look: