How much were candidates in toss-up races spending on Facebook in 2018, and what ads were they spending their money on?

To find out, we used Real Clear Politics 2018 Election Maps to identify toss-up races, and then looked to the new Facebook Ad Archive Report to learn more about their spending. There were three reports for our 45 identified toss-up races: May-October 20, October 21-27, and October 28-November 3. We broke down who from the list of toss-up races was spending the most in each report, what their surge spend was, and if they ended up winning or losing their race.

Here’s how much they spent: What can we learn from this graph?

Though political campaigns are spending more this cycle than in 2014, Democrats continue to outspend Republicans at every turn. It’s accepted wisdom that Democrats spend more on digital than Republicans. The numbers this year confirm that wisdom: Democrats outspent Republicans on Facebook by a factor of 3.

Countless campaigns, PACs, and IEs bankrolled last minute Facebook ads leading up to Election Day. But which campaigns had the biggest surges in the days before the election?

Claire McCaskill spent over half a million dollars on Facebook ads in the last 15 days of the campaign. That is 40% of her total spend from May – November 3. Her spend just for that last week would rank #11 on our list of top spenders. Despite that massive infusion of dollars into Facebook, the last minute surge did not work in McCaskill’s favor.

So what was she spending that much money on? Take a look at some of the ads running in the final stretch of the campaign: Bill Nelson spent $192,969 in the last 15 days of his campaign, which is 44.7% of his total spend from May – November 3. On trend with the Democrats’ closing argument across the nation, Nelson’s ad messaging focused on health care.

Nelson conceded to his Republican opponent Rick Scott after a recount. 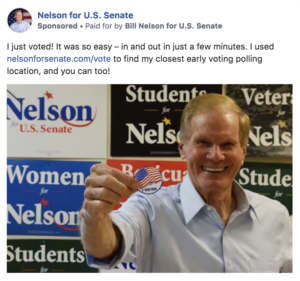 We can’t tell how much a last-minute ad spend impacted these races. But these numbers do tell us you shouldn’t count on a last-minute surge to put your campaign over the edge. Your campaign should invest early enough to build your grassroots army of supporters and donors over time.

Looking for an agency to help you develop your ads strategy? Look no further. At IMGE, we work to maximize your dollar through a holistic approach with data-driven results. Ad serving, fraud-monitoring, you-name-it tools – we’ve got them, and we’ll put our best-in-class ad stack to work for you. We offer a capable and highly adaptive advertising team, equipped to tackle the ever-changing way in which people engage with media online.